Some time soon I hope to have a blurb here... you know to tell you who I am why I decided to blog...

As citizens we have to stand up to the intimidation of our elected officials, even if it means being prepared to join in the rumble.


I came to Canada in the late 1960's, when my family chose to leave the political turmoil in the United States behind. A major part of the story of our family's arrival in Canada was the tale of how my 5'-0" mother was assaulted by a thug at a democratic rally, while she had 4 young children in tow.

For me the most disgraceful and unacceptable political sin is the use threats and intimidation as a political tool. Therefore, as you may imagine, the sight of Rob Ford, the Chief Magistrate of Toronto, threatening Councillor Denzil Minnan-Wong on the floor of the Council Chamber not more than 25 feet away raised my ire to say the least.


Just as enraging was Rob Ford's shameful denial of the event when Denzil Minnan-Wong asked for an apology. Ford's repeatedly denied, ridiculed and blustered, until finally issuing yet another lame #fauxpology. Rob hasn't changed in the slightest, he's unrepentant, and unapologetic.

Undemocratic behavior is a family trait as exhibited by Doug Ford later jumped into the fray to defend Rob indefensible behavior with his own attempts to attack Councillor Minnan-Wong.

Sadly these two alone are not the ones who disrespect our political institution. Council Chair Frances Nunziata denied having seen see the altercation when she had been staring intently at Denzil Minnan-Wong just as Ford had approached Councillor Minna-Wong.

Is Team Ford really so oblivious to the 300 plus people in Council Chambers? Are they oblivious to the dozens of video cameras and hundreds of cell phones recording the action. Or do they just not care? 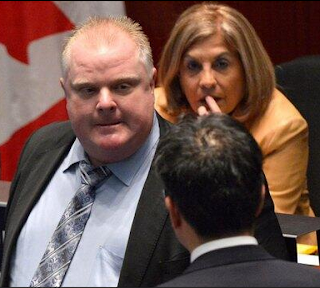 Here's Nunziata was staring intently at Councillor Minnan-Wong during the altercation. But could she hear what Ford was saying? Well lets see, 'Mayor' Ford was appears to have been loud enough that a clerk a similar distance away snapped her her around to look at Rob Ford. 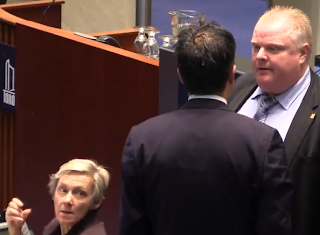 Okay, with that set-up decide for yourself, view the Globe and Mail video of the incident.

By way of full disclosure, I'll cop to being the person that started the chants of "shame." The Ford's believe they can bully council because no one holds them to account, their core supporters condon and encouraged such behavior while the rest of us sat silent.

If I learned one political lesson from my childhood, it's that you can't run from the politics of intimidation, you have to stand united against it. That's why on Wednesday I was pleased to see Toronto Council taking united action against Rob Ford on the matter.

I'll continue to go to important Toronto Council meetings if I feel that the Ford's are planning to use the tactics of intimidation and I'll continue to shame them until the Ford's to get the message "Respect your fellow Councillors, or Sit Down and Shut Up!"

The following exclusive video has the good stuff the Globe and Mail edited out.


After I left Friday morning to spend another day at Toronto Council, I found that Joe Fiorito wrote an awesome article for the Star "The Bravest Councillors in Toronto" It's a must read. A great writer, got the story that I saw, but didn't, couldn't, write.